mainly three different variations exist in the region since the 18th century:

Major differences between the different styles were the shape of the women‘s cap and some customs when wearing the different variations of the costumes.

The costumes were incluenced by Spanish and Dutch fashion of the early 18th century. For different occasions, different skirts were worn. While the costumes are known for their red underskirt (the women of Schaumburg were also known as “redskirts”), theirs is also a black variation for times of mourning and funerals as well as a lighter underskirt for celebrations, like weddings and confirmations.

There was more information communicated with the costumes. Besides the regional varieties that showed yor hometown or village it also showed your social and economic status. Interested men could easily see if you were married by looking at the type of cap you were wearing while the richness of detail and the materials used showed how wealthy you were. Decorations of the costume were made of pearls and embroideries, sometimes requiring dozens of hours of work to complete.

While very elaborate costumes were worn on holidays, for celebrations and to church, simpler dresses consisting of a blue print skirt and a blouse with a sweater vest were worn every day and for work in the household or the fields.

While nowadays the costumes are not worn to these occasions anymore, there are numerous folklore dance and costumes groups which keep the tradition alive and pass on the information about this interesting aspect of Schaumburg culture.

The traditional cap of the Lindhorster style 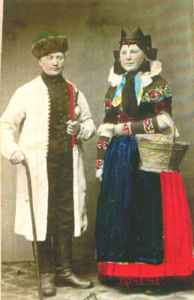 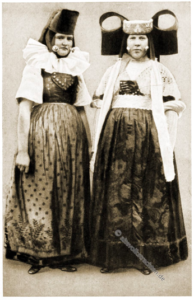 A folklore group in Schaumburg 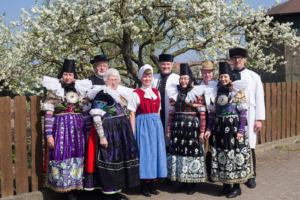 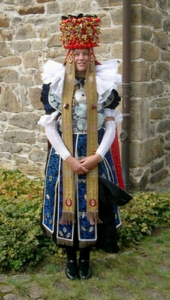 The male costume of the island of Skyros

Every social class on the island was defined by its own costume. Among others there was the costume of the marine people, the shepherds,...

The female costume of Kimi

Kimi is a beautiful coastal town of the island of Evia and birthplace of the scientist Georgios Papanikolaou, the inventor of the  Pap...