Kroje (pronounced “kro-yeh”) are folk costumes worn by Czechs and Slovaks.  Gothic influence is seen in tying shawls and kerchiefs on the head. Fine pleats and gathered lace collars typify the Renaissance era.  From Baroque bell-shaped skirts to delicate Slavic patterns, these folk costumes show the complex growth of Czech and Slovak traditions. Kroje had many regional variants with typical decorations and/or colours.

There are three basic types of kroje:

Folk costumes are not worn by people in Czech and Slovak republics anymore, only during feasts people use them as a living tradition.

We could divide moravian folk costumes into three main areas:

The folk costumes in Haná

The folk costume of Haná is one of the most interesting examples of folk culture of the Czech and Moravian people for its ethnographic and cultural-historical significance. It carries all the features of a flat region, as each folk costume is dependent on material, but also on shape, climate and natural conditions. The features of the blessed region have been imprinted in it, reflecting in traditional colors, richness.

The Haná folk costume was worn all over Haná, in central Moravia from Uničov to Bílovice, from Litovel to Holešov. It was not always and everywhere the same. Like other costumes, it changed. It has two kinds: ordinary and festive. Ordinary costume is made of domestic materiál. Festive costume then mostly from urban material. 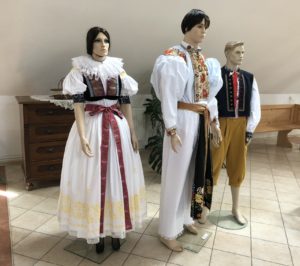 The folk costume in Slovácko

Moravian Slovakia or Slovácko is a cultural region in the southeastern part of the Czech Republic, Moravia on the border with Slovakia (Czech: Slovensko) and Austria. Known for its characteristic folklore, music, wine, costumes and traditions. The area forms part of both the Zlín and South Moravian administrative regions.

Its most important center is the town of Uherské Hradiště which is located on the Morava River. Other important population centers include Uherský Brod, Břeclav, Hodonín, Strážnice and Kyjov.

In the 9th century the region of Moravian Slovakia was the centre of the Great Moravian empire. The women’s costume catches attention with its stiff sleeves, wide collar and a bright red skirt. Women wear bright Turkish scarves on their heads, which differ from village to village. Men wear long linen trousers tucked in high leather boots. An accessory of each man is a linen shirt with a heavily embroidered vest (kordulka). 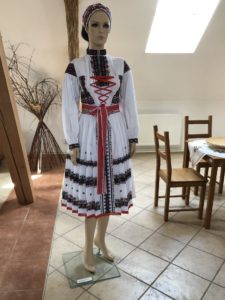 The folk costume in Valašsko

The appearance of contemporary costume is closest to folk clothing worn in Wallachia in the second half of the 19th century. For sewing, home-made hemp and linen canvas, natural coarse woolen wool, dyed woolen cloth By the end of the 19th century, the use of factory production materials was also extended to sew work, holiday and ceremonial costumes.

Rukavce – Sewn from thick cotton canvas, lawn or linen. White or embroidered in color, with machine or crocheted lace, short or long in a skirt. Stitched sleeves or buttoned under the arms and side panels.

Košula – White straight-cut shirt with straight sleeves sewn from cotton or linen. Decorated with embroidery according to the counted thread, with lacework or decorated only on a narrow standing collar. It is attached at the neck by a lace or ribbon.

Brunclek – Vest of woolen cloth of many shades of red, purple (clove), blue.      Decorated with metal buttons and lacing.

Preschool children wore kanduš, canvas dresses cut at the waist, with a long skirt and long sleeves. When they came school girls got dresses in one piece and boys got canvas shirt, short or winter pants, coat 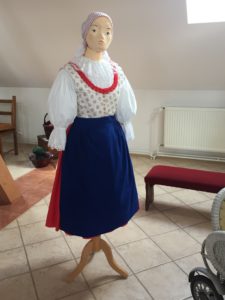 Nowadays folk costumes aren’t worn too much. It is worn only in traditional festivals, open air museums or by older people in small moravian villages. One of companies, which sews folk costumes is the company „Tradice Slovácka“ in Blatnička near Veselí nad Moravou. But less and less people know, how to make hand made folk costumes and it is made by automatic sewing machines, as you could see in our video at webpage hereditas.club. You could scan QR code to see it. 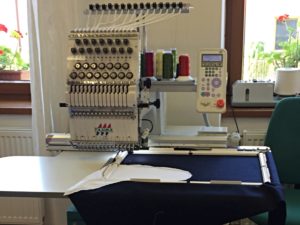 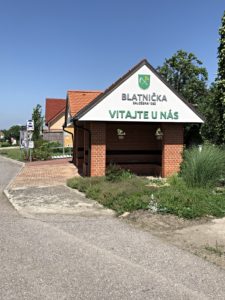