In 2010, Gingerbread craft from Northern Croatia was added to the UNESCO’s List of the Intangible Cultural Heritage. Licitar Hearts are a traditional symbol of Zagreb. 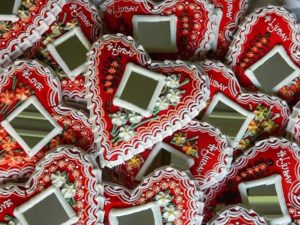 Licitar or gingerbread heart is a colorful cake that is made out of honey dough, colored with fruity colors and decorated with sugar paste and little mirrors. Even though it is called gingerbread, it does not contain ginger as a spice. In the past, they were made by hand in wooden moulds, but nowadays they are made in tin moulds. The craftsperson who makes licitar hearts, also usually makes candles and gifts out of wax. There are other shapes of licitar – horse, horseshoe, bird, mushroom, and so on. Although edible, licitars are usually just kept as souvenirs, given as gifts or wedding favors, or used as Christmas tree decorations.

The meaning of the mirrors

In the past, on Valentine’s day or another occasion, boys would give girls licitar hearts and they would stand behind them, because it was believed that whomever you see in the mirror, is your soulmate. On the heart, there would also be a short love letter. Licitar hearts are symbol of love in Croatia.

In the last years a lot of people in Greece make their own natural homemade soap out of olive oil, in the same way their grandparents did....

The Arrival of Croats

In the 7th century, Vug – father of Hrvat (which means Croat), Klukas, Lobelos, Kosenc, Muhlo, Tuga and Buga, was an ally of a khan...