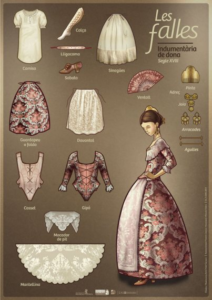 The traditional costume of a Valencian woman, the badly named fallera suit, because in fact she was already dressed before the fallas appeared as a party, has a long tradition in history. It appeared in the eighteenth century and began to be a work costume of the Valencian gardeners, but with the passage of time it was transformed, and led to a more elegant clothing that was used on special occasions. In short, the current faller costume is the party costume worn by the Valencian centuries ago. Among its variants we find the suit of the XVIII century, more Frenchified; those of coteta, or justillo; and the one that emerged in the 19th century, called de farolet because of its bluff-shaped sleeves. In the hair, the woman can wear a bun or three (Three bows in the case of the nineteenth century). A larger one is carried on the back of the head, while two smaller ones, the “rodetes”, are carried on the head. The bows are taken with passing needles and adorned with combs, the pint for the back bun and the rascamonyos for the rodetes.This costume at least costs about 2000€, and often exceeds 12,000€.

The fallera dresses with shoes covered with cloth, generally, the same one of the suit. The legs are covered with silk or cotton socks, draped and embroidered with different motifs. Above, the petticoat, which is underwear that is placed under the skirt; Normally, this garment is added a cup so that the skirt has more volume. The fabric of the skirt can be silk, cotton or rayon, printed with flowers and other vegetal motifs. Above the apron is placed, which is embroidered in gold or silver thread forming striking drawings.

As for the upper part of the suit, the piece of underwear is the shirt or chambra, since until the early twentieth century did not begin to wear underwear as we know today. Above it is the bodice, which is usually made with the same fabric as the skirt. There are two distinct styles: the eighteenth century and the nineteenth century. 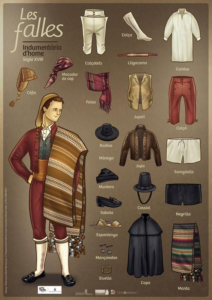 The traditional masculine dress is the suit of saragüell, which appears under the Sarawil denomination in texts. This dress is placed directly on the body and on it you can place or not other garments. The fabric of this clothing is the canvas for the days of work, and on holidays it is covered with a second pair of wool or silk, known as bold. Another ofthe traditional male clothes is the torrentí suit, which is characterized by having more tight pants to the leg and a chopetí, a kind of vest or jacket. In the head, the man usually carries a mocador (handkerchief), a chopper or a skullcap, the latter made of crochet hooks, which are complemented by different hats and hats, such as rodina, cossiol or montera.

"This is a Christmas Carol, a Villancico, and on Christmas Eve (Noche buena) we like playing this song with a 'zambomba'." A zambomba is a...

The male costume of the island of Skyros

Every social class on the island was defined by its own costume. Among others there was the costume of the marine people, the shepherds,...