Delphi in the 6th century B.C. was the religious centre and symbol of unity of the ancient Greek world. 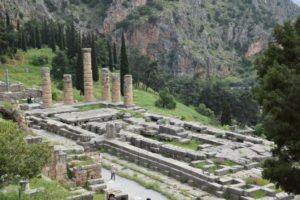 According to the ancient Greeks, the Temple of Apollo, where the oracle spoke, was where the “Omphalos” was located, that is, the “navel of the universe”, the centre of the world. In ancient times the sanctuary had great political and religious influence all over Greece and organised the Pythian Games, the second most important games after the Olympics. The games were named after Pythia, the priestess who delivered the oracles that were interpreted by the priests of Apollo. From rulers of cities to everyday people, everyone came to consult the oracle, which was believed to have predicted succesfully events such as the Trojan War and the Argonautic expedition. In the archaeological site of Delphi the visitor can see two sanctuaries, dedicated to Apollo and Athena, and other buildings, that were mainly used for sports. The archaeological site of Delphi was inscribed in the UNESCO World Heritage List in 1987.