The Arrival of Croats

In the 7th century, Vug – father of Hrvat (which means Croat), Klukas, Lobelos, Kosenc, Muhlo, Tuga and Buga, was an ally of a khan Hadaor. Hadaor promised to give him land by the sea, but Vug got killed in Avars’ ambush. Before he got killed, he’s been telling his daughter Tuga about the sea and white islands. 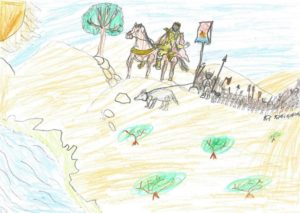 Heraclius, the Emperor of the Byzantine Empire, was worried because Avars and Persians threatened his Empire. He needed help and he has heard about the Croats who ride wild horses and who are persistent and brave in battles, so he sent his counselor to find out how many Croats there are, how powerful they are and what their customs are. The counselor asked the librarian for help and he found out that Croats have been living on the Black Sea coast for a long time and that they used to live on the land now inhabited by Persians.

Heraclius then sent 100 horsemen with carriages full of gifts in order to find Croats and ask them for help in the defense of his Empire. He has also promised to give them land.

Hrvat was a proud soldier and known to take his people to the battle when asked.

Tuga was known for being able to forsee the future, and remembering what her father told her, she encouraged Hrvat to accept Heraclius’ offer.

Hrvat’s warriors pushed Avars up north, all the way to the river Sava. In the last battle, Hrvat cut off Hadaor’s head.

The land they conquered they called Hrvatska (Croatia).

In 2010, Gingerbread craft from Northern Croatia was added to the UNESCO’s List of the Intangible Cultural Heritage. Licitar Hearts are a...

The story about the raven Hans Huckebein was written and illustrated by Wilhelm Busch, a poet and illustrator from Wiedensahl in the county...