The IGS Schaumburg in the city of Stadthagen has more than 1200 students and around 130 teachers and other employees. The school was founded in 1991 and teaches students from grade 5 – 13 (age 11 – 19). At the moment the school has three locations spread out over Stadthagen, but grades 5-11 are close together. It is an inclusive school and has students with varying disabilities in most classes.
The school has a computer and projector in every classroom, four computer labs and a library. Grade 7 introduced the use of tablets for digital learning in 2018.

The IGS Schaumburg also has a garden, two shop rooms equipped with machines to work with wood, clay and metal.
School usually starts at 7.55am and ends at 3.30pm. During the lunch break students can eat at the cafeteria. In the afternoons on Tuesdays and Thursdays can join a multitude of clubs, like football, basketball, big band, arts and crafts. 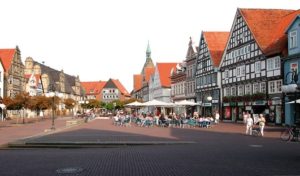 The city of Stadthagen in Northern Germany in the state of Lower Saxony was founded in 1222. The next bigger cities are Minden (85.000 inhabitants) 20km to the West and Hannover (520.000 inhabitants), 40 km to the East.

Gymnázium a Jazyková škola s právem státní jazykové zkoušky Zlín is located at the top of the Tomas Garrigue Masaryk Square in...