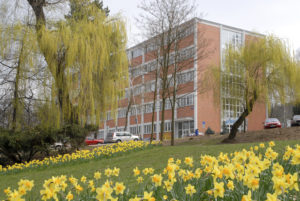 Gymnázium a Jazyková škola s právem státní jazykové zkoušky Zlín is located at the top of the Tomas Garrigue Masaryk Square in Zlín. The director of the grammar school is Mgr. Alena Štachová.

For students, the school is easily accessible from both the bus or train station and the city bus stops. School day usually starts at 8am and usually ends at 2am in the afternoon. There is a large gym, outdoor playground, games room, study room and library. Our school organizes language courses in the morning and afternoon during the school year.

Each student has to learn two foreign languages. English is compulsory, then students choose their second language. They can choose out of German, Spanish, French and Russian. The school also offers Chinese lessons.

Our school also has a school television and that’s very cool.  For classes or meetings, we can use the school garden. And one of the best things about our school is that it organizes trips for students to other countries, such as UK, China, France or Spain. 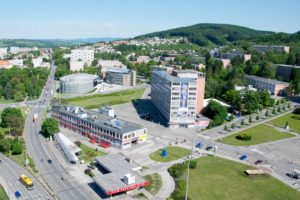 Zlín is a regional city with about 75 000 people. That makes it the industrial and entreprenerial centre of central Moravia. The history of this city reaches out to the year 1322, when Zlín was a craftsman guild centre of the surrounding Walachian settlement. An important landmark of Zlín’s history is the year 1894, when Bata’s shoemaking company was founded. Thanks to the exceptional growth and prosperity of the company and the influence of Tomas Bata, who was also a mayor of the city, Zlín in the interwar period became a modern city centre with an outstanding architectonic style and life tempo.

Zlin is also the city with an outstanding functionalist architectural style. It is known for its brick houses that were built at the beginning of the 20th century by Bata company for its employers and their families and at that time (1938) the tallest building in the Central Europe – skyscraper – the famous “Twenty-one”. Another interesting buildings are the Grand Cinema completed in 1932, which was one of the largest in Europe with seating for 2 270 people, and the Tomas Bata Memorial built in 1933 (and reopened in 2018), the original purpose of the building was to commemorate the achievements of Bata before his unexpected death in a plane crash in 1932. The building itself is a constructivist masterpiece of František Lidie Gagura. Congress Center is another modern functionalist building finished in 2010 and designed by well-known architect Eva Jiricna. Congress Center is also the seat of Bohuslav Martinu Philharmonic Orchestra (established in 1946).

In modern era Bata’s heritage served as an example and helped to start further development.  Also, Tomas Bata university was founded in the year 2001.

Nowadays there are a lot of opportunities for sport, culture and education. For example tennis courts, football fields, cinemas, theaters and so on.

Every May there is an Interational Film Festival for Children and Youth (one of the oldest and largest film festivals in the world) and every August there is an international car race – Barum Rally.

In the surroundings tourists can visit pilgrimage sites Saint Hostýn and Velehrad. A tourist can also visit Zoo Lešná (one of the largest ZOO in Czech Republic) or flower gardens in Kroměříž which are listed on the UNESCO list of the World heritage sites.

The IGS Schaumburg in the city of Stadthagen has more than 1200 students and around 130 teachers and other employees. The school was...